Why People Avoid Bringing Up Conflict At Work

Current workplace cultures are very competitive and perfection oriented. This means we are expected to be our best, do our best and work our hardest. But it is difficult to bring your best and whole self to work when these cultures promote behaviours such as intense competitiveness, bullying, manipulation, groupthink and discrimination. If people do not feel safe and supported in their workplaces, it directly affects their ability to be present at work. A person who goes to work in fear or dread isn’t likely to bring up their feelings or concerns to the rest of the group. There is a saying I’ve been seeing on the internet that says, “people don’t leave jobs, they leave bosses.” This is so true. Leadership is often the root influencer of workplace culture.

We also are in a time where Equity, Diversity and Inclusion is a huge trend and buzzword. We see it everywhere. Businesses from all over are doing these EDI trainings for their employees. But is the culture actually changing? Are the behaviours and environments changing to match the language and concepts learned? According to these panelists and my direct experiences, not always. There is a lot of performance rather than substantial value leading change. Many people still face discrimination and oppression at work. When they bring up these issues with co-workers or leadership, it is often not addressed or it is minimized because, well, we did EDI training so this can’t be happening here. The reality is bringing up conflict when you are an oppressed minority at work can be a huge risk. There are multiple reasons why someone might avoid bringing up a conflict at work.

Here are a few of them: 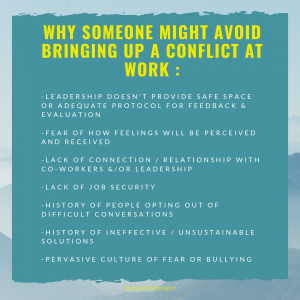 If leadership doesn’t take the time to promote safer space or ensure there is adequate protocol for submitting feedback, then it is likely people won’t come forward, and that their concerns won’t be handled in a timely or clear manner. This goes beyond just having anti discrimination or harassment policy; bi-yearly trainings, etc. It is the day to day response to feedback and the way it is received that creates the feelings of safety. If behaviour doesn’t match what’s on paper, that is a barrier. If protocol keeps no record of these incidents or complaints, they go undocumented and as a panelist mentioned, “people’s experiences leave with them”.

-FEAR OF HOW FEELINGS WILL BE PERCEIVED AND RECEIVED

The person may be worried about whether their concerns will be taken seriously or minimized; if their feelings about the situation will be validated or ignored.

-LACK OF CONNECTION / RELATIONSHIP WITH CO-WORKERS &/OR LEADERSHIP

If a worker doesn’t feel they have any solid relationships with their co-workers or leadership, they might not bring up a conflict out of fear they won’t receive any solidarity. Additionally, if they already have strained relationships, bringing up a conflict might cause further damage to what little is bond is currently left. In cases of discrimination or harassment for example, it is often the same person(s) bringing up the issue and becoming the subject of workplace gossip or bullying.

Permanent positions are becoming fewer and fewer with contract positions becoming more normalized and standard. It is also often that those in contract positions hold more marginalized identities. Fear of losing your job or not being reconsidered/hired for your position is a reason someone might choose to avoid bringing up a conflict.

-HISTORY OF PEOPLE OPTING OUT OF DIFFICULT CONVERSATIONS

If the workplace has a pattern of people choosing not to participate in difficult conversations as a way of preserving their own comfort or because they see conflict as a bad thing, it sets a precedent and promotes a culture of complacency and defensiveness rather than growth and accountability.

If the workplace has a history of ineffective solutions such as quick fixes, fixing for the wrong reasons, or fixing solely for the short term then it is very likely this conflict is caused by a repeat/pattern of behaviour. These solutions are often ineffective and not sustainable because they do not address root issues or structural and fundamental changes. In addition many workplaces do not provide the amount of time, energy and resources needed for addressing and resolving disputes. These cycles cause employee burnout. People do not want to come forward with a conflict when they know that nothing is actually going to ever change.

-PERVASIVE CULTURE OF FEAR OR BULLYING

Punishment, shaming, discrimination, harassment, exclusion, cliquiness, etc. These are behaviours that foster cultures of fear and bullying. These types of environments are not a safe place for people to bring up issues unless they are the ones who hold power, resources, and support. Any worker on the receiving end of these behaviours would likely feel too scared to bring up conflict. In these situations, people often leave the job instead.

People in leadership positions have the ability and choice to promote fostering a different kind of work environment than ones of competitiveness, bullying, manipulation, groupthink and discrimination. Workplaces with stronger relationships as a result of worker protections and safer conditions are less likely to suppress conflict and more likely to be able to deal with it in constructive ways.